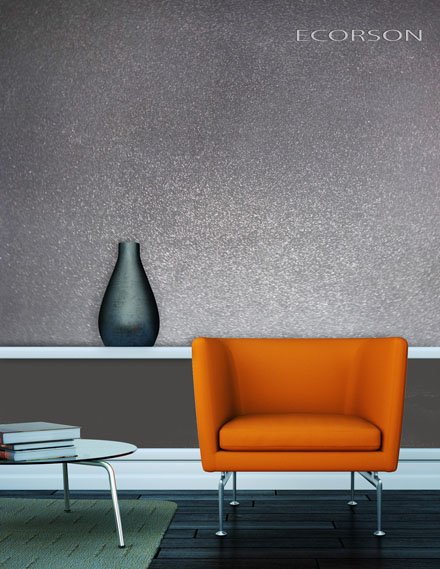 Lumicca 1D and 4D are two types of transparent paint with added glitter. The numeral means the amount of shimmering particles – in the decorative paint Lumicca 4D there are four times more of them than in the paint Lumicca 1D. In both cases, investors can choose from several databases of colors: Silver, Gold and Multicolor, which is the designation of glitter particles added to the paint.
Lumicca 1D and 4D paints, that are used alone. Their magic in creating decorative effects lies in the possibility of changing each wall into a beautiful, clearly shimmering composition. These paints are applied on a previously painted color wall and it is enough to completely change the perception of the room. By using different amounts of glitter and selection of different versions of the database you can create a virtually unlimited number of effects on the surfaces of different colors. What is important – although on a small area you can easily paint Lumicca 1D and 4D by yourself, over a large area there is a risk to “gather” glitter particles with a roller, so it is wise to seek help from a professionals with more experience in applying this type of paint.

Lumicca 1D and 4D are paints that can be used almost anywhere. They complement the different types of decorative effects and because these are a very high quality paints, they can be successfully used also in “difficult” areas, such as hallways or corridors, simply altering the look of each wall.

WHERE CAN YOU USE LUMICCA 1D and 4D PAINT?

Lumicca 1D and 4D paints not only looks great. What stands behind their popularity are also evidences directly related to functionality.

HOW TO GET THE BEST RESULT?

The layer of Lumicca 1D or 4D decorative paint is applied to the wall painted in any color. Of course, for practical reasons, it is recommended to paint the surface twice with the backing paint, which will result in a uniform color and will eliminate any imperfections.
The paint Lumicca 1D and 4D are applied by grinding it with the shaft. The product is sold as a ready-to-use, but if the texture does not allow for convenient distribution of paint it may be diluted with about 15% of water. To decorate large areas it is advisable to seek professional help – it is easy then to unevenly spread glitter particles, so the effect will be counterproductive.