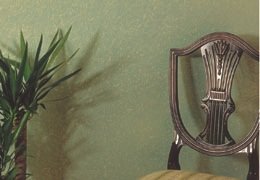 Tamponato effect, achieved through the use of the deerskin stamps, allows you to create surface that is visually attractive, masks the minor failings and is full of light reflections. Ekorsil, Murimal 200 or ECO12 paints are responsible for the basic color, and Lumicca Pearl paint (transparent) is responsible for the colored flares and glow effects. The idea of ​​the whole effect is very simple – it is all about turning a monochrome wall into the surface that will play with even the slightest rays of light. This effect, though apparently it may seem otherwise, is very elegant and not overwhelming. It is rather a modest addition to interior design, regardless of the chosen color – Lumicca Pearl is a family of paints giving a fairly moderate effects, that though distinct, are still quite subtle.

This is one of the easiest effects to prepare on your own. It requires only to supply the appropriate size of deerskin stamp. It is rather hard to make any errors here, and if the wall beneath the surface of the last layer of paint had some minor flaws, the sparkling surface of Lumicca Pearl will mask them perfectly. Of course, it is good to try avoiding such a situation, so the effect will be more beautiful, but if there was a tiny sliver of inequality or the small spall, it will probably not be visible.

Tamponato effect is very versatile in nature, so it can be used almost anywhere. Of course, last call is always made by the investor and should be made based on an analysis of a the color of the room and consideration of other, alternative to Tamponato decorative effects.

WHERE TO USE TAMPONATO EFFECT?

Tamponato effect requires the use the paint, that has an excellent illuminating properties, but functional values also speaks for the use of this family of paints.