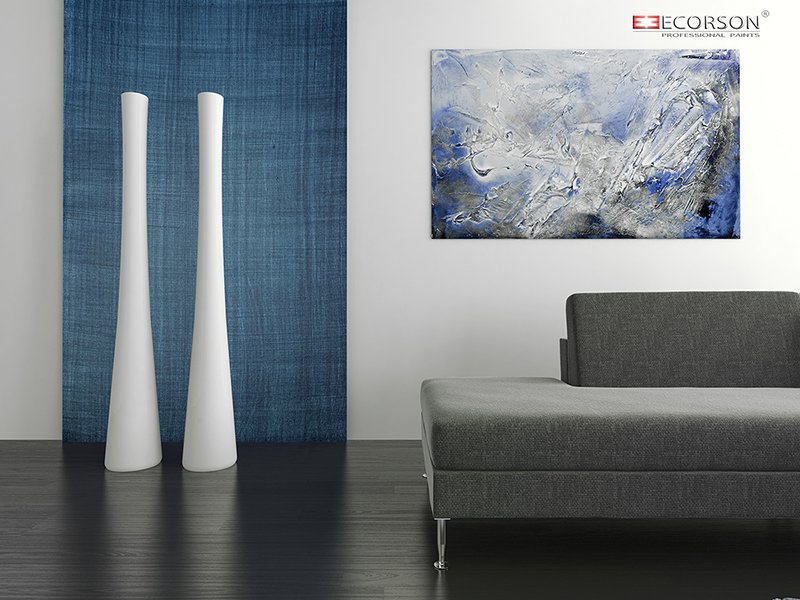 Muricon decorative plaster combined with Jeans Velatura paint is a perfect material, from which you can create beautiful decorative effects on the walls. Although it requires a lot of work, it is difficult to achieve a good effect without considerable experience, but the result is worth every minute and every dollar. That this is basically one of those effects that you can get at relatively low cost. Decorative effect is confusingly similar to applying to the wall a sizeable portion of the denim canvas in its original indigo color.

Muricon plaster is characterized by a large resistance and excellent flexibility, which makes the patterns created from it are very warm to the touch, and at the same time remain stable. Velatura Jeans paint in the color of original denim is the perfect complement to the structure of woven cloth, which can be obtained from the Muricon plaster. The effect is like a pair of jeans – a universal, because fits everything and almost indestructible. This similarity goes beyond expectations, right?

Wiping of the Jeans Velatura does not have to be kept in the original color tone. The offer also includes other, more vanguard shades and colors, and textured plaster will be completely covered with a layer of color, except that the structure will in this case be clearly visible, and will positively affect the reception of visual effect. The combination of durable high-grade plaster and decorative paint can give really excellent results, and the operation does not have to ruin investors budget.

WHERE TO USE THE EFFECT OF MURICON & JEANS VELATURA?

The combination of Muricon structural plaster and Jeans Velatura paint results in an extremely powerful effect, so it is impossible to create an exhaustive list of applications. Everything depends on the imagination of the designer and the idea of ​​the investor how to use an unusual wall finishes.

HOW TO OBTAIN OPTIMAL RESULTS?