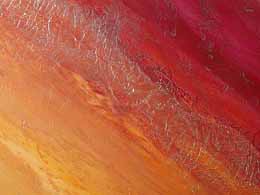 Halley is a structural effect, one of those that arise from the use of transparent Lumicca Pearl system paints. Modern, crisp colors give character not only to avant-garde style interiors, but also to fantastically finished restaurants, some parts of the hotel facilities or classic flats. This is one of the most aggressive color effects that can be achieved. By default, it is formed on the subtle structural substrate of Murillo paints, but it is not the only possible solution, although omitting the structural layer is not recommended for various reasons.

Properly applied Halley effect leaves a perfectly smooth, slippery surface which does not attract even small dirt particles. The resulting effect is also resistant to impact and detergents, so it can be used in all places, also as images or fragments of larger compositions. Colored passages of at least three distinct shades are dominant and you can hardly call them neutral. There are cold and warm colors available in the catalog, but the final decision always belongs to the investor who decides what visual effect does he care about.
Application of Halley effect is complicated mainly because of the number of layers that you need to put one over the other. What is important, you must also take care of the appropriate precision, since the result of its absence might be not smooth surface, and so it will lose much of its gloss, which beside the color fairy-like spectacle, the main advantage of this effect.

WHERE TO USE HALLEY EFFECT

Lumicca paints, which are colored core of Halley effect, have many functional benefits, not only aesthetic. It is them who are largely responsible for the popularity of this line of paints.

HOW TO CREATE THE EFFECT?

The technique of applying primer paint is responsible for creating the structure. It is good to apply it with a brush to create an interesting pattern, which later can be further enriched. Decorative layer is applied with several brushes (one for each color of paint Lumicca) and the finish is done with the rubber wiper shaft, what creates a gradation between colors. Finally, the entire surface is covered with the transparent Lumicca Pearl paint with a suitably selected afterglow effect and it is distributed with the wiper until you get a uniform thin layer across the finish.